“My feet are heavy now, but on I go
My head erect beneath the tragic years
The way is steep, but I would have it so;
And dusty, but I lay the dust with tears
Though none can see me weep; alone I climb
The rugged path that leads me out of time”

Though the running feet are heavy with hundred odd years, still this Municipality has to run with new vigor. This Municipality needs new potentiality with new inputs, new thoughts, new systems, and over and above fulfill the hopes and aspiration of citizens of the Municipal area.

Budge Budge Municipality is more than 109 years old and has a strong cultural heritage and deep sense of values of life. With the passage of time this deep sense of value system has percolated into down stream of the citizens of this municipality. However, with the advancement of industrial and commercial growth of this area a fresh rejuvenation throughout the strata of life is needed.

A uniform livelihood of the general citizen, literacy at the primary level, environmentally clean urban surroundings with retention of green belt around the residential area, retention of water bodies and ensuring healthy and safe living environment to all citizens with better health facilities and equitable access to basic services such as water supply, sanitation and roads are our main objectives.

This Municipality Intends To Provide Basic Education To All, Minimum Health Facilities To The Poorest Of The Poor, Clean And Pollution Free Environment To The Citizens Of This Municipality And Create A Healthy Cultural Atmosphere In The Municipal Area.

Enriched with a long historical account and strategic geographical location, Budge has gradually grown up from a humble rural setup to a township. The folklore associated with its name dates from when the Portuguese arrived in this land to set up their regime. The area was marshy. The Portuguese explorers used to wear long rubber boots that when sunk in the marshy land would make a typical sound that is Budge……Budge……Thus the place got this peculiar name. Located along the bank of river Hooghly, the Britishers found it suitable to locate several jute mills and refineries in Budge Budge. With the spread of industries, the requirements of the workers increased, labour both skilled, semi skilled and unskilled, migrated from different places and settled here. The rapid increase in population with the influx of workers from different states and the growing need to provide them with basic amenities augmented the formation of a municipal body in Budge Budge. Thus in the year 1900, 14th March, under the West Bengal Municipal Act 3 of 1884(section 17), the Budge Budge Municipality was established.

Budge Budge is an important nodal point on the Indian Eastern Railway map. The municipality is in the extreme Southwest of the State and is the gateway to rural Bengal, being the terminal railway station of the local train service to Kolkata. As the municipality area is so located in an advantageous position so that this area can avail water, rail and road transport system, the area has become the distribution point for the goods to rural Bengal and also other adjoining states/districts.

There are two public ferry services facilities operating in the Municipal area at Jhautala Ghat and Budge Budge Kalibari Ghat. Other than these two ghats there is one private ghat operated from the Cheviot mill.

Economic Base including Major Establishments:

Budge Budge is an old industrial town situated on the bank of river Hooghly and on the side of the Kolkata Port, the major industries here are mainly larger ones namely oil industries and four big jute mills and quite a few number of oil storage units. The four major jute mills are Budge Budge Jute Mill, Cheviot Jute Mill, Caledonean Jute Mill and New Central Jute Mill. Places of Interest

The climate of this region like rest of the Gangetic Plains in West Bengal is tropical with monsoon season spreading from early June to early October. The weather remains dry during the winter (mid-November to mid- February) and humid during the summer in the range between 50 – 95 %. During the months of April and May, thunderstorms, sometimes accompanied by hail, frequently occur at dusk. Winter prevails for a short period with chilling dry wind coming from the northeast. The average rainfall varies between 150-200 cm/yr. The maximum temperature about 40* C in the month of May and minimum temperature is 10*C in the month of January.

The Location Map of Budge Budge within the State of West Bengal: 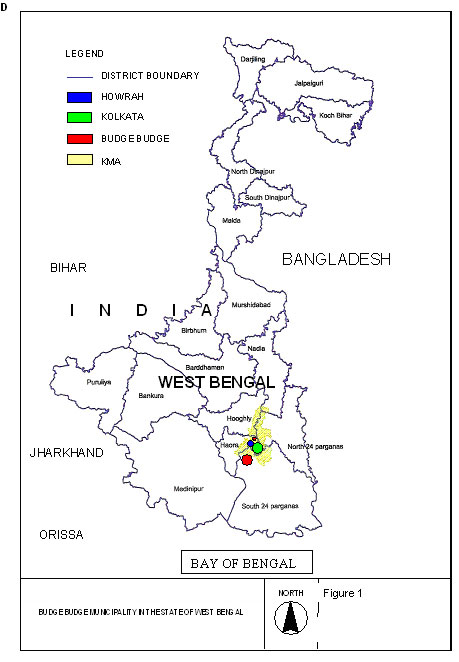 What is e-Governance ?
Electronic Governance (e-Governance) is the use of Information and Communication Technologies (ICT) for the planning, implementation, and monitoring of government programmes, projects, and activities.